Marina Yannakoudakis MEP joined Hendon Conservatives to help get Boris Johnson re-elected London Mayor. Marina delivered postal vote forms with Councillor Hugh Rayner to ensure the maximum turnout on May 3rd. Marina is Conservative MEP for London and Conservative Spokesman on Women's Rights and Gender Equality in the European Parliament. She is also a full member of the parliament's Environment and Public Health Committee and a former Barnet councillor. 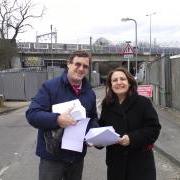 If you would like to get involved with the Hendon Conservative Association at any time, please contact us at office@hendonconservatives.org