Cllr Lachhya Bahadur Gurung was the Deputy Mayor of the London Borough of Barnet until May 2021.

Cllr Gurung was born in Nepal. He is a former Gurkha who joined the British Army in 1980 and trained as a Radio Telegraphist in the Signals Regiment, having served in many countries around the World he retired after 18 years of distinguished service in the rank of Staff Sergeant in 1998.

In recognition of his exemplary Service to the British Crown he was awarded with a Long Service and Good Conduct Medal (LSGC) in 1995.

He has been living in the UK on and off since 1984 and has been permanently living in Barnet since 2005. By profession he is a businessman. He ran a cash and carry business for last 10 years and currently he is a property investor as well as a Nepali interpreter.

He is a Community leader. He chaired the Burnt Oak Nepalese Community for 4 years. He has been working tirelessly for the community as well as for the newly arrived former Gurkhas and their families to settle in the UK.

He also helped promote community integration and cohesion by engaging with the activities of local diverse communities. Prior to becoming a Councillor he was also awarded a BARNET CIVIC AWARD in 2012 in recognition of his outstanding contribution towards promoting communal harmony and collective spirit through community engagement.

Cllr Gurung is married to Shova Gurung and has 3 grown up children (2 daughters and 1 son) and they all have graduated from UK universities.

The attached map shows the new boundary and polling stations for Edgwarebury ward. 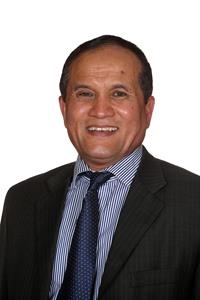