Nick Mearing-Smith is married with five adult children and eight grandchildren. He lives in Edgware and was elected to Barnet Council for Edgware in a by-election in 2021. He was elected in May 2022 for the new ward of Edgware, which includes much of the old Edgware ward and part of the old Hale ward.

Before he moved to London for career reasons, he lived in Bristol, where he was a city councillor. He has now been a resident of Edgware for several years and has been able to use this previous experience as a councillor, together with his local knowledge, to serve the people of Edgware. A key focus of his attention is the important job of rejuvenating Edgware town centre.

After he was elected Nick served on the Financial Performance and Contracts Committee, the Licensing Committee and the Audit Committee of Barnet Council. He now serves on the Planning Committee B and West Area Committee. He has also been appointed as a trustee of Days and Atkinsons Almshouses.

The attached map shows the new boundary and polling stations for Edgware ward. 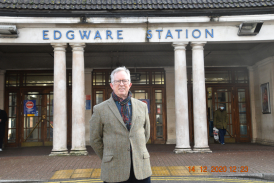